Most people who are beginning with photography, and using a DSLR for the first time make the same common mistake that ruins their cherished photos every time.

That mistake is not knowing the minimum shutter speed that is needed in order to successfully handhold your camera and come away with a sharp and in focus photograph.

As I said, this is a very common mistake and one that people don’t think much about. Often they assume that their camera will make the correct decision on things like that. After all that’s what they bought a top-dollar camera for, right?

Today’s cameras as advanced and technologically equipped as they are, cannot make the right choice when it comes to shutter speed.

They are designed to force your exposure settings to a neutral gray color tone. Essentially your camera is constantly trying to minimize highs and lows or in other words, brights and darks, into an equal distribution which it bases off the color gray.

With this in mind, if you are shooting in an environment that doesn’t match that requirement, the camera is then doing all it can to even out any peaks or valleys of light that is present in your scene. They will often do this by dropping the shutter speed lower, in order to compensate.

Most people cannot hand hold a DSLR at shutter speeds slower than the focal length of the lens they are using.

What that means is that if you are using a 50mm lens; most normal humans cannot consistently hold a camera with that lens, still enough to avoid camera shake below 1/50 sec.

This rule is a sliding rule that changes based on your focal length of the lens. So if you shoot the exact same shot with a 200mm zoom lens, then you will need at least a 1/200 shutter speed.

However, your trusty DSLR will often allow the shutter speed to fall much lower than that, causing nasty camera shake.

There is another crucial aspect to consider in this too… The subject you’re shooting.

If anything is moving in your shot (even people breathing or smiling), then that 1/50 sec or 1/200 would still be too slow.

You would probably need something more along the lines of 1/120 and 1/320 instead.

So, knowing this critical information and the fatal flaw of modern cameras I mentioned earlier, it’s vital to make sure that you have an adequate speed. This is the most important thing, over just about anything else. 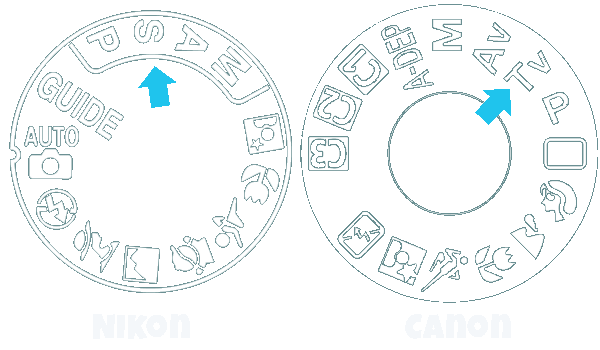 The best camera settings mode for most users then, now knowing everything you’ve read above, is to use Shutter Priority or TV mode on your camera.

This mode, available on almost all cameras today, will allow you to lock your cameras shutter speed in, at one speed. A speed high enough to cover your focal length, your own body movement and any movement of your subject matter.

Once you lock that number in, the camera will only alter the other two exposure settings in order to maintain the required shutter speed.

This means you can stop worrying about blurry shots and just focus on composition and the other basics of photography.

If you find that you are still getting blurry images, it is most likely motion blur from your subject. In this case, keep increasing your shutter speed until you no longer see blur.

I will often double or triple the shutter speed on my camera, if I don’t know exactly how much subject movement I will have in the scene. Obviously, with people, they are completely unpredictable so I always bump my minimum shutter speed way up.

It’s better to have clear, in focus shots with no motion blur, even at the expense of depth of field or digital noise grain.

Your shots will always be consistently better using this method, I guarantee it.